Out this Tuesday, here's a clip from our restoration of The Man Who Watched Trains Go By (1952) starring Claude Rains and Marta Toren.

A rare color noir, it's based on the 1938 novel by Georges Simenon (AKA The Paris Express).

Mild-mannered bookkeeper Kees Popinga lives a mundane life and dreams about the places he can go on the trains that travel through his hometown of Groningen, Holland. But when a French police detective shows up at his firm to inspect the books, Popinga’s unremarkable existence is instantly altered, and he soon finds himself on the way to Paris with a suitcase of cash, on the run from the law and entranced by a strange and beautiful woman.

Based on the 1938 novel by Georges Simenon—the author who created fictional sleuth Jules Maigret, and whose books like The Man on the Eiffel Tower and The Brothers Rico were also adapted for the big screen—The Man Who Watched Trains Go By casts beloved Warner Bros. character actor Claude Rains (Mr. Skeffington) as the meek Popinga. The supporting cast includes Herbert Lom, Marta Toren and Anouk Aimee… with appearances by such solid British veterans as Felix Aylmer, Marius Goring, Lucie Mannheim and Ferdy Mayne.

This taut and suspenseful classic, shot in Technicolor, also benefits from beautiful location shooting in both the Netherlands and "The City of Light."
Posted by David K. at 5/23/2018 02:36:00 PM No comments:

For the first time on any home video comes all 21 of Hal Roach's two-reelers starring the comedy team of Thelma Todd and Patsy Kelly. 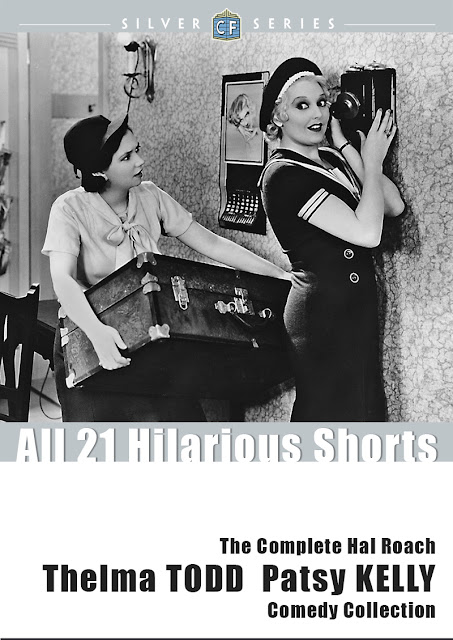 For the first time on home video comes all 21 of Hal Roach's two-reelers starring the lovely Thelma Todd and the pugnacious Patsy Kelly. These timeless shorts showcase the incredible comedic talents of an unsung duo who simply wanted to make audiences laugh... and succeeded!

In Hollywood, the laugh factory operated by Roach was known to one and all as "The Lot of Fun." Established in 1915, the studio hosted many of the familiar names in comedy at one time or another: Harold Lloyd, Charley Chase and the popular and iconic team of Laurel and Hardy. ­

Determined to find the female equivalent of "The Boys," Roach paired Thelma Todd (already under contract and a veteran of several Chase shorts) with comic actress ZaSu Pitts. Thelma and ZaSu appeared in 17 shorts between 1931 and 1933 that were very popular with moviegoers, but their fruitful partnership ended when Pitts and Roach failed to come to terms on a new contract.

After seeing comedienne Patsy Kelly in the stage production of Flying Colors, Roach agreed that she was the perfect replacement for ZaSu, and the new team of Todd-Kelly was soon putting out hilarious efforts like Babes in the Goods (1934), Maid in Hollywood (1934) and Top Flat (1935). All-American Toothache (1936) would be their final pairing as Todd's tragic death brought an end to the girls' entertaining partnership.

Though efforts were made to jump-start the franchise with Pert Kelton and Lyda Roberti, the writing was on the wall where Roach's two-reelers were concerned as the producer soon transitioned solely to "streamliners" and feature films.

Here's a clip from Miss Annie Rooney (1942) where Shirley has a "Cinderella" moment with a young and snobbish June Lockhart and then is rescued by Dickie Moore. Don't blink and you'll catch a quick glimpse of young, pre-Superman Noel Neill.

Restored and on Blu-Ray & DVD from ClassicFlix. Buy today!

It’s spring in the Rooney household, and starry-eyed Annie dreams of blossoming love. Her father dreams of something more tangible -- to be parked on easy street. But in their working-class Irish neighborhood, the odds are against them both.

Shirley Temple stars in the title role of Miss Annie Rooney and displays all the endearing charms that made her America’s little sweetheart. Along the way, Annie jitterbugs a path straight into the heart of Marty (Our Gang alum Dickie Moore) who may fulfill the hopes of both Annie and her father.