ClassicFlix is pleased to announce another slate of upcoming titles which include nine films and two television shows.

All nine classic features will be released on both formats with five debuting on Blu-ray and the other four making their DVD and HD bow. They include Tomorrow is Forever (1946) starring Claudette Colbert and Orson Welles and He Walked by Night (1948) starring Richard Basehart (which is expected to be part of an Anthony Mann/John Alton boxed set).

Five titles, all premiering on Blu, are scheduled for release in April from Kino including the arrival of a 4K restoration of 1957's A Farewell to Arms. Click here for details.

KINO: A Trio of Comedies Arrive in April

Three titles from Kino are scheduled for release on Blu-ray in April, with all three premiering on Blu. Click here for details.

Three new releases have been announced by Warner as part of their Archive Collection, all on Blu-Ray, including the arrival of Fred Astaire's final musical, Finian's Rainbow (1968). Click here for details.

Criterion announced Orson Welles' Othello will be making its Blu-Ray premiere in May, as well as receiving an upgraded DVD. Click here for details. 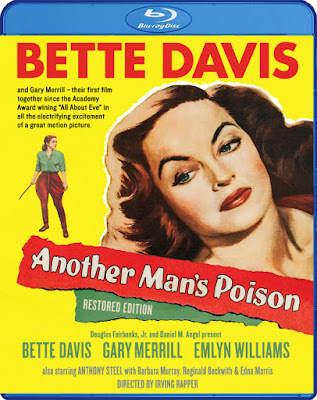 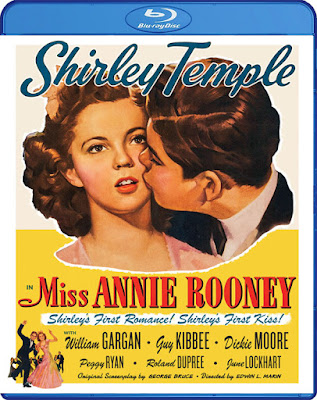 It is my pleasure to announce the first two films being released by our home video label: Another Man's Poison (1951) starring Bette Davis and Miss Annie Rooney (1942) starring Shirley Temple.

Both will be released on DVD & Blu-ray for the respective retail prices of $24.99 and $29.99 and will be available at all major online retail outlets including Amazon, TCM and MoviesUnlimited in the coming days. Street dates are March 28th for Poison and April 4th for Rooney.

About the transfers, we acquired Cohen's stunning restoration of Poison for this release and transferred and restored Rooney which now looks terrific. We'll be posting clips on our Facebook page in the coming days. There are no bonus features, but they will be English subtitled.

More about our other future releases coming this week also. In the meantime, stay up to date by visiting our Facebook or Twitter page.

Another Man's Poison (1951)
In her first role since starring as Margo Channing in the Academy Award®-winning All About Eve (Best Picture, 1950),

Bette Davis plays mystery writer Janet Frobisher, a cold and conniving woman who will stop at nothing to get what she wants -- and what she wants at the moment is her secretary’s fiancé Larry (Anthony Steel).
But Janet’s plan hits a snag when her estranged husband shows up unannounced after attempting to rob a bank. Her husband’s partner in crime, George (played by real-life husband Gary Merrill), further complicates matters for Janet when he pays her a visit later the same day. Getting rid of one of them proved easy. The other, not so much.

Filmed in England and co-produced by Douglas Fairbanks, Jr., Another Man’s Poison presents the dynamic Bette Davis at her devious and beguiling best.

Miss Annie Rooney (1942)
It’s spring in the Rooney household, and starry-eyed Annie dreams of blossoming love. Her father dreams of something more tangible -- to be parked on easy street. But in their working-class Irish neighborhood, the odds are against them both.

Shirley Temple stars in the title role of Miss Annie Rooney and displays all the endearing charms that made her America’s little sweetheart. Along the way, Annie jitterbugs a path straight into the heart of Marty (Our Gang alum Dickie Moore) who may fulfill the hopes of both Annie and her father.