WARNER ARCHIVE: Seven Days in May and The Loved One Arrive on Blu

Two new releases have been announced by Warner as part of their Archive Collection including the arrival of the 1964 Burt Lancaster political drama, Seven Days in May on Blu.

Also included this week on Blu-Ray is the comedy The Loved One (1965).

Seven Days in May will be available here at ClassicFlix on May 1st while The Loved One arrives May 9th, adding to the total of over 1,700 Warner Archive titles exclusively available for rent at ClassicFlix.com.
Posted by Unknown at 4/25/2017 12:46:00 PM No comments:

Kino has announced June 6th as the release date for the Gloria Swanson silent drama Zaza (1923) making its DVD and Blu-ray debut. Also arriving on June 20th is the mystery drama Coronet Blue. The complete thirteen-episode series originally aired in 1967.

CLASSICFLIX LABEL: The Killer is Loose Arrives in June on Blu & DVD 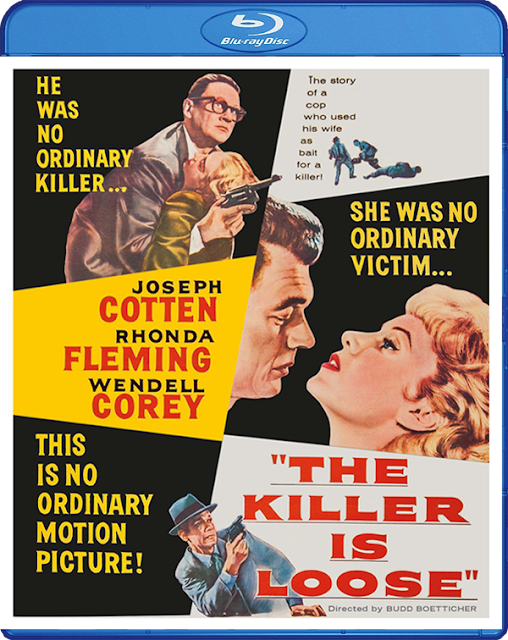 Directed by Budd Boetticher and starring Joseph Cotten, Rhonda Fleming and a chillingly haunting Wendell Corey, the newly remastered and restored film will retail for $29.99 (Blu) and $24.99 (DVD) respectively. English subtitles are included.

Look for it in the coming days at all major online retail outlets including Amazon, TCM and MoviesUnlimited.
More about our other future releases coming soon. In the meantime, stay up to date by visiting our Facebook or Twitter page.

SYNOPSIS:
Detective Sam Wagner’s job is never easy. Even an average day proves stressful for him and his family. But this is no ordinary day for Wagner (Joseph Cotten) or his wife Lila (Rhonda Fleming).

Sent to prison, and believing Wagner is responsible for his wife’s death, Poole is desperate for revenge. Escape and murder soon follow with the haunting Poole bent on taking away the woman Wagner loves. Will the detective and his men save her in time?

Helmed by the gritty Budd Boetticher, The Killer is Loose takes the director’s unique visual style away from the plains and into the world of suburbia for this taut and suspenseful thriller. Close your windows, lock your doors -- The Killer is Loose!
Posted by David K. at 4/11/2017 10:12:00 AM No comments: